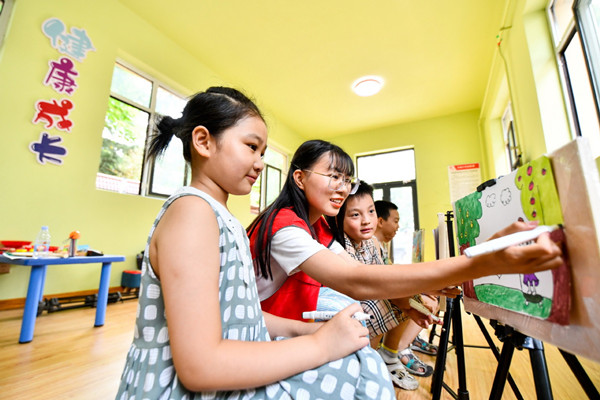 A volunteer teaches children how to paint at a community center in Luanzhou, North China's Hebei province on July 24, 2021. [Photo/Xinhua]

People working in the education industry who commit violent crimes against children, such as sexual assault, abuse, abduction and trafficking, will be banned for life from working in the sector in China, according to a new guideline.

The 10-article guideline, jointly issued on Friday by the country's top judicial authorities — the Supreme People's Court and the Supreme People's Procuratorate — as well as the Ministry of Education, aims to strengthen the protection of juveniles and eliminate wayward workers from the industry.

Lauding the guideline, which will come into effect from Tuesday, Xu Hao, a lawyer from Beijing Jingsh Law Firm, said that it will not only keep children far from harm, but is also good for the education sector.

"A number of offenses regarding sexual assault in recent years occurred on campus and were found to be committed by educators," he said. "In a case, for example, a primary school teacher was punished for sexually abusing several girls in his dormitory between 2013 and 2019."

Prohibiting such people from working in close contact with children has been highlighted over the past few years, when the Criminal Law and the Minor Protection Law were revised, Xu said, but he added that "there was still a problem — how long the ban should be and how it works — that often confused us in legal practice".

"I'm glad to see that the guideline provides the answer, that educators who violently or sexually abuse children will face a lifelong ban in the industry," he said.

Under the guideline, courts are required to clarify the ban in verdicts and inform education authorities responsible for the management of the defendants within 30 days after the rulings become effective.

The move will help education departments and relevant institutes as they conduct background checks on prospective employees and provide a way for the public to remain engaged, the top court said in a statement.

Education agencies are required to confiscate the teaching certificates of offenders in a timely manner, while prosecutors should play a supervisory role in determining whether the bans are effective, according to the guideline.

Courts are also allowed to prevent people in the education industry who commit other types of crimes from working closely with children for three to five years, depending on the severity of the crimes.

Xu also said, "The clear work-flow among prosecutors, judges and education administrators in the legal document, I believe, will greatly reduce the possibility of those with a child-related criminal record from getting into the education sector."