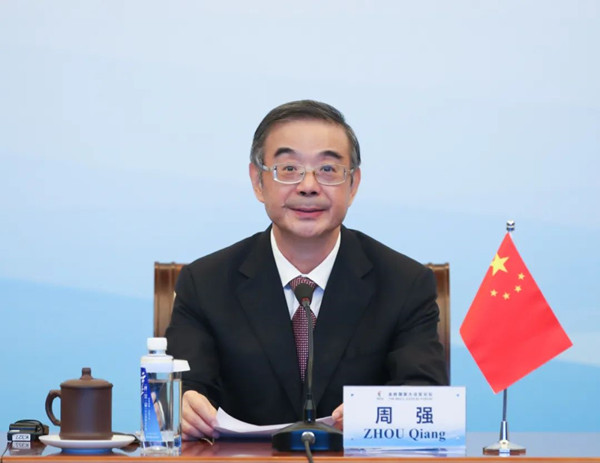 Zhou Qiang, chief justice and president of the Supreme People's Court (SPC) of China, gives a keynote speech on the BRICS Justices Forum on Sept 21. [Photo/court.gov.cn]

Zhou Qiang, chief justice and president of the Supreme People's Court (SPC) of China, attended the BRICS Justices Forum on Sept 21 and gave a keynote speech.

Zhou said that the BRICS cooperation mechanism is an important platform for cooperation among emerging market countries and developing countries. Chinese courts are determined to uphold the international order based on international law to deepen international judicial exchanges and cooperation with BRICS countries, he said, adding that they also seek to jointly promote the cultivation of a market-oriented, law-based and international business environment, and strive to provide strong judicial services for building a community of security for us all and a community with a shared future for mankind.

He shared the experience of China's courts in promoting international judicial exchanges and cooperation in areas of security, property rights protection, the digital economy and dispute resolution, and proposed initiatives on deepening cooperation.