Net should be utilized to find shared ground 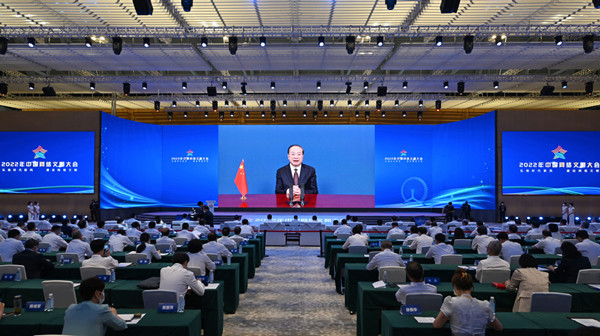 Huang Kunming, a senior Communist Party of China (CPC) official, stresses the importance of advanced culture and embracing the the spirit of the times in cyberspace at the China Internet Civilization Conference, which opened on Sunday in North China's Tianjin. [Photo/Xinhua]

Attendees at a conference focused on internet civilization have called for finding shared ground in culture to promote international communication over the internet and mutual learning among civilizations.

They also advocated for upholding inclusiveness and respecting differences among civilizations in internet civilization exchanges while addressing the sub-forums during the 2022 China Internet Civilization Conference in Tianjin on Monday.

Guo Yezhou, deputy head of the International Department of the Communist Party of China Central Committee, said equality and inclusiveness, rather than discrimination and confrontation, should be reflected in international internet communication, and cultural differences should not become an obstacle to exchanges among civilizations, still less a reason for confrontation.

He said that international internet communication should respect different civilizations' understanding of culture, systems and paths, and resist racial discrimination and ideological prejudice.

"The so-called narrative of democracy versus authoritarianism is a kind of ideological protectionism, isolation and decoupling and it is an artificial creation of division and a backward step in history," Guo said.

He said that international communication through the internet should highlight the commonality, fairness and coordination of international development, promote the common values of all mankind such as peace, development, equity, justice, democracy and freedom, and serve as a bond of solidarity rather than a geopolitical tool or a breeding ground for Cold War mentality.

International network communication should stand on the side of historical progress and justice, resist politicization and stigmatization, firmly establish the correct orientation of harmonious coexistence and create an atmosphere and accumulate conditions for building a community with a shared future for mankind, he said.

Qu Yingpu, publisher and editor-in-chief of China Daily, called for being inclusive, having a broad vision and respecting the differences among civilizations to promote cultural exchanges.

Qu said that what separates people are often cognitive barriers and prejudice toward different civilizations. The internet, with its natural heritage of equality, openness and inclusiveness, is a perfect stage for dialogue and exchanges and mutual learning among civilizations.

"In strengthening exchanges and mutual learning among internet civilizations, we need to be based on China's reality, take advantage of the internet and new media and develop new methods to tell the story of Chinese civilization to the world, allowing them to better understand China, China's concept of civilization, Chinese people, the Communist Party of China and the nation," he said.

Wang Huiyao, head of the Center for China and Globalization, said that the commonality of civilizations between the East and West is far greater than the differences, and it is a necessity to promote open and inclusive exchange and mutual understanding between the two sides to find lasting peace and sustainable development.

"We need to think about how to promote the openness and inclusiveness of the world civilization with the internet as the core to promote mutual understanding and trust between countries and people," he said.

In recent decades, the clash of civilizations' consciousness and morphological differences has been widely discussed. It seems that there is a huge gap between the East and the West. However, they face common development issues including the rich-poor divide and aging populations, Wang said.

"The globalization of China's future development is closely linked to internet civilization. China will join hands with other countries to enhance mutual learning among civilizations," he said.