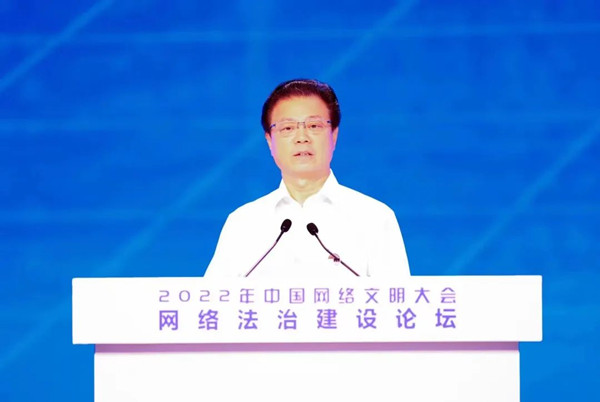 Sheng Ronghua, deputy director of the Office of the Central Cyberspace Affairs Commission, addresses the Sub-Forum on Rule of Law Building in Cyberspace of the 2022 China Internet Civilization Conference, Aug 29, 2022. [Photo/court.gov.cn]

The Sub-Forum on Rule of Law Building in Cyberspace at the 2022 China Internet Civilization Conference closed on the afternoon of Aug 29, in North China's Tianjin municipality. Sheng Ronghua, deputy director of the Office of the Central Cyberspace Affairs Commission (OCCAC), and Wang Tingkai, head of the Commission for Political and Legal Affairs of Tianjin, attended and addressed the forum. Yang Linping, vice-president of the Supreme People's Court (SPC), delivered the closing remarks.

Sheng said that the OCCAC has given full play to the fundamental role of the law-based cyberspace governance, accelerated the process of cyberspace-related legislation, set up law enforcement and supervision institutions, and rectified pressing issues, such as competition disorder, personal information leak and false marketing, which has yielded positive results in safeguarding people's rights and interests and promoting digital justice.

He hoped that all sectors of the society take the forum as an opportunity to join hands and accelerate the rule of law building in cyberspace, insist on reform and innovation, strengthen comprehensive governance and coordinated advancement, and improve the efficacy of law-based governance. All forces should be synergized to foster a cleaner and more upright cyberspace and safeguard the healthy development of the internet based on the rule of law, in a bid to achieve a higher level digital justice and internet civilization, he added. 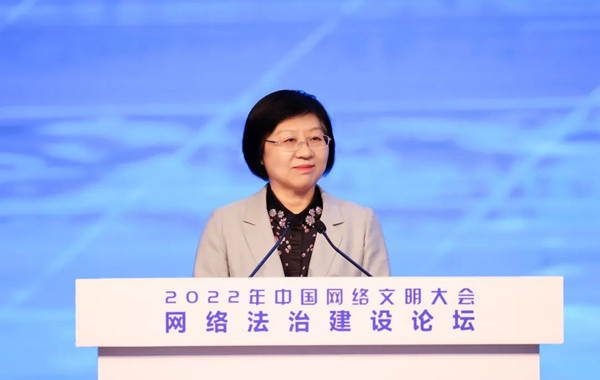 Yang Linping, vice-president of the Supreme People's Court, delivers closing remarks at the Sub-Forum on Rule of Law Building in Cyberspace of the 2022 China Internet Civilization Conference, Aug 29, 2022. [Photo/court.gov.cn]

Yang said that the SPC has made proactive explorations on internet judicial models, intensified the application of such technologies as big data, cloud computing, blockchain and artificial intelligence, released three sets of regulations on online litigation, mediation and operation, as well as a directive on intensifying the judicial application of blockchain technology. It has also built a smart court that handles cases online, with transparent and intelligent services for the whole process, and trialed a number of cases with social and rule-setting significance, Yang said.

She pledged that the SPC will take the opportunity presented by this forum to continue communication and cooperation with attending parties, expand the scope of cooperation, advance the absorption and materialization of the consensus reached at the forum, and intensify the construction of the smart court and internet judiciary, in a bid to provide stronger judicial services for the healthy development of internet civilization and the digital economy. 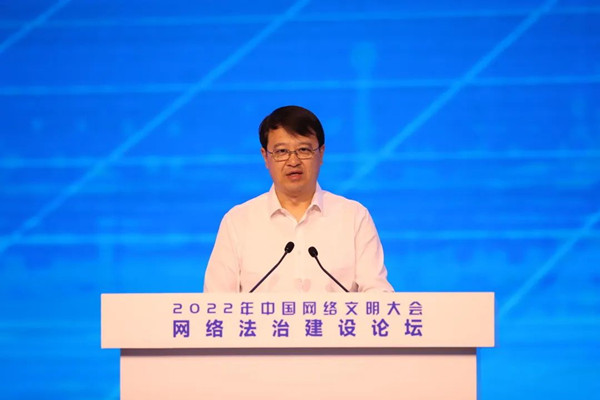 Wang Tingkai, head of the Commission for Political and Legal Affairs of Tianjin, addresses the Sub-Forum on Rule of Law Building in Cyberspace of the 2022 China Internet Civilization Conference, Aug 29, 2022. [Photo/court.gov.cn]

Wang said Tianjin has prioritized the high-quality development of law-based governance in cyberspace with a systematic approach,  innovated a law enforcement system for online data security, launched a series of campaigns for a clean cyberspace, and promoted the deep integration of the rule of law and digital technology, which have provided strong legal guarantees for cyberspace governance.

He said that the forum serves as a bridge between the internet, rule of law and civilization, which is bound to facilitate the mutual learning and effective connection of cyberspace governance rules and means.

He hoped that all attending parties made full use of the forum and jointly explored new methods of law-based governance in cyberspace, in a bid to promote mutual development of regulated guidance and vitality stimulation, enhance synergy of divided labor and concerted governance, and strive for a cyberspace ruled by law and supported by virtues.

Themed on achieving higher level digital justice with law-based governance, the forum discussed frontier theories and current topics, including the reform of digital courts, the construction and development of the smart court, and digital governance and internet civilization.