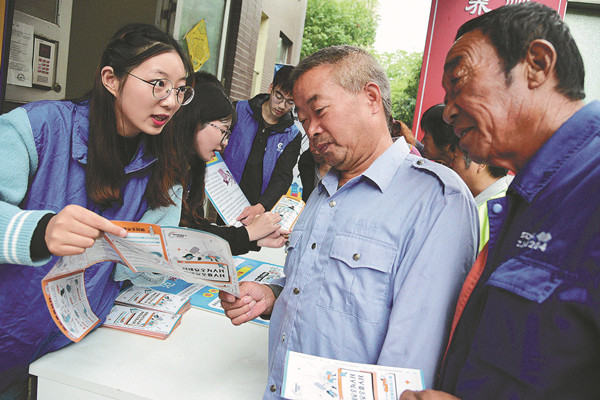 A volunteer from Jiangsu University of Science and Technology helps promote greater awareness of telecom fraud and network safety in a community in Zhenjiang, Jiangsu province, on Oct 15. [Photo by Shi Yucheng/for China Daily]

Some 1,400 cases of fraud targeting the elderly have been handled by Chinese courts since the country launched a campaign against swindlers and stepping up the protection of seniors in April, China's top court said on Wednesday.

Of these cases, 455 focused on the crime of fraud, and 906 were related to illegal fundraising, according to the Supreme People's Court.

While dealing with the cases, courts nationwide also found management loopholes and risks in industries related to the elderly, so they have sent more than 400 judicial suggestions to government departments by the end of last month calling for them to rectify and improve their work, the top court said.

For example, courts in Hunan province took advice to local civil affairs departments, market regulators and financial supervision authorities through 60 of these suggestions, in addition to intensifying the fight against fraud.

Besides cheating the elderly out of money by faking financial projects or healthcare products, many scammers also claimed they could help sell artworks at a higher price and charged victims service fees.

On Aug 4, a total of 100 people in 15 separate cases received prison terms and fines for cheating seniors in Beijing. They were given sentences ranging from eight months to life imprisonment by the capital's eight courts.