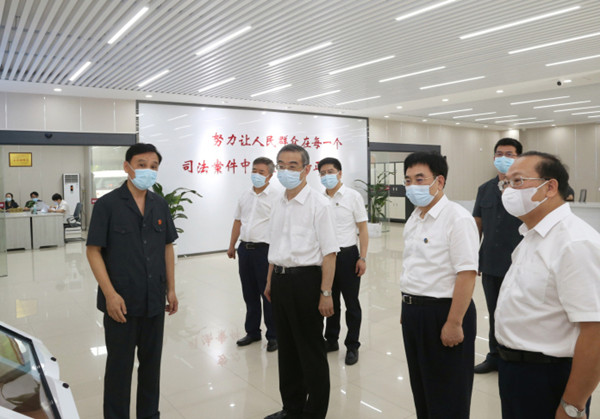 Zhou Qiang, president of the Supreme People's Court (SPC), reiterated that the court will provide strong judicial support for building South China's Guangxi Zhuang autonomous region into a splendid socialist land with Chinese characteristics during his visit to the region from July 18 to 20.

Luosifen, a spicy rice noodle originating in Liuzhou, has become an industry worth billions of dollars. To secure the smooth development of the industry, law-based governance is indispensable. The Liunan district people's court in Liuzhou set up a circuit court in Hexi High-tech Zone, where Luosifen enterprises are concentrated, in order to resolve disputes involved in the industrial chain and provide judicial services with efficiency. Zhou fully acknowledged the act of allocating judicial forces to the grassroots level to resolve business-related disputes at the source. He called for more practical and effective judicial measures to facilitate convenient and efficient dispute resolution for all market entities and secure the transformation of traditional industries and growth of industries with local characteristics.

Given the fact that Liuzhou is home to multiple ethnic groups who are scattered across the region, the Liuzhou Intermediate People's Court set up 24 tribunals at the grassroots level and one circuit office in every county to settle disputes. Zhou pointed out that this is the heritage of the Fengqiao model in the new era. He urged efforts to give full play to the institutional strengths of socialism with Chinese characteristics, and synergize all forces to resolve disputes at the grassroots level to achieve better social governance.

As a national model court, the Yufeng district people's court in Liuzhou has been striving to improve judicial services by offering one-stop litigation services at its service center. Zhou visited the center and exchanged ideas with judges, mediators and volunteers. He urged greater efforts to focus on pressing difficulties and problems that are of great concern to the people and strive to make more outstanding achievements.

Nanning, the capital city of Guangxi, is an important portal to the opening-up and cooperation with member states of the Association of Southeast Asian Nations (ASEAN). To support the China-ASEAN trade development, courts in Nanning have intensified their efforts in foreign-related commercial and maritime trials and piloted circuit courts in the free trade zone and collegial benches for ASEAN-related cases. Zhou visited the Nanning Intermediate People's Court and learned about work related to case registration, fast-track trials, mediation and execution. He stressed deepening reforms, improving mechanisms, enhancing quality and efficiency of foreign-related judicial work, and equally protecting the legitimate rights and interests of domestic and foreign parties in accordance with the law.

At the tribunal in the Nanning Economic and Technological Development Zone, which specializes in trials involving enterprises within its jurisdiction, Zhou was briefed about measures on reducing costs and improving efficiency for local enterprises such as intensifying pre-litigation mediation, providing professional guidance and setting up green channels. Zhou acknowledged their efforts and urged improving judicial policies that are beneficial to the people and enterprises, and fostering a good rule-of-law environment for market entities in the private sector. The Xixiangtang district people's court in Nanning works with local labor supervision and enforcement departments to provide one-stop rights protection service to the flexibly employed workers. Zhou stressed that they need to innovate judicial mechanisms that make things easier for the people, effectively safeguard workers' rights to fair employment, and protect the legitimate rights and interests of the people in accordance with the law.

At the Guangxi High People's Court, Zhou held a symposium with local judicial staff where he heard a work report from the court and exchanged ideas with them. He fully acknowledged the achievements made by Guangxi’s courts in judicial reforms, smart court construction and team building, which have contributed to the high-quality socioeconomic development of the region. He said courts in the region need to strengthen trial and execution work and provide strong judicial services for a splendid Guangxi, a socialist land with Chinese characteristics, and pursue a holistic approach to national security to resolutely safeguard the country's political, institutional, and ideological security, as well as national unity, social stability and border tranquility. He called for protecting the legitimate rights and interests of all market entities in accordance with the law, serving the coordination of epidemic response and socioeconomic development, and adopting a people-centered approach to protect people’s livelihoods. Judicial reforms and smart court construction should be intensified to speed up the modernization of the trial system and capacity, and a zero-tolerance approach should be taken in the fight against judicial corruption, he said.

During the trip, Zhou also met with Liu Ning, Guangxi’s Party secretary. Liu extended appreciation to the SPC for their long-term support in Guangxi's judicial reform, team building and international judicial exchanges. He pledged support for rule-of-law development in Guangxi, as well as for judicial exchanges and cooperation between Guangxi and ASEAN countries, so as to better serve the building of a closer China-ASEAN community with a shared future.