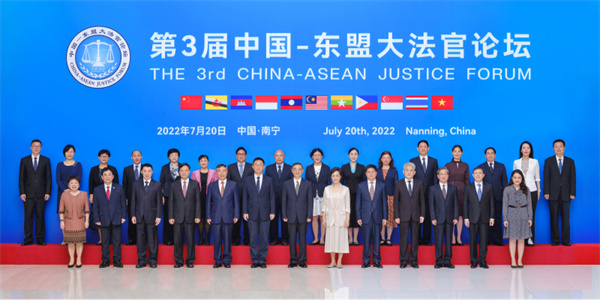 Zhou Qiang, chief justice and president of the Supreme People's Court (SPC) of China, called for deepening practical judicial cooperation between China and member countries of the Association of Southeast Asian Nations (ASEAN) at the Third China-ASEAN Justice Forum.

Hosted by the Supreme People's Court of China and organized by the Guangxi High People's Court, the forum was held on July 20 both online and offline in Nanning, South China's Guangxi Zhuang autonomous region.

At the opening ceremony, Zhou expressed his hope that Chinese courts and other attendees could take the forum as an opportunity to make more concentrated efforts to build a closer China-ASEAN community with a shared future, speed up efforts to align with the  Regional Comprehensive Economic Partnership Agreement (RCEP) economic and trade rules, and scale new heights in judicial cooperation between China and ASEAN countries.

Zhou noted that judicial cooperation had always been an essential area under the framework of China-ASEAN cooperation. Past years have witnessed the continued friendly exchanges and cooperation between courts of China and ASEAN countries and practical and wide-ranging cooperation  in high-level visits, information exchanges, judge training, and judicial assistance has achieved fruitful outcomes, according to Zhou.

He said that the judicial organs in China and ASEAN countries shoulder the important responsibilities of maintaining social stability, promoting economic development, and fostering fairness and justice.

This forum  is expected to play a pivotal role in facilitating China and ASEAN countries to jointly explore new paths of judicial cooperation and new modes of legal services, Zhou said, adding that it will also provide firm judicial services for the building of a closer China-ASEAN community with a shared future and high-quality implementation of the RCEP.

Zhou suggested that judicial organs in China and ASEAN countries should continue to consolidate the foundation of judicial cooperation, build on achievements in that area, and improve cooperation mechanism.

Liu said that Guangxi was one of the first regions along the ancient Silk Road and is a pioneer and window of China’s opening-up and cooperation with ASEAN countries, adding that Chinese courts would like to join hands with other attending parties to materialize the outcomes of this forum,  strengthen judicial cooperation, and provide strong judicial support for the development of the China-ASEAN comprehensive strategic partnership.

Chief justices and presidents of top courts from 10 countries and the secretary-general of the ASEAN attended the opening ceremony and delivered speeches via video link. They said that China and ASEAN have longstanding relations,  frequent economic and trade exchanges,  and have achieved positive results in cooperation in various fields.

They agreed that judicial organs should strengthen cooperation and jointly create a sound and law-based environment for investment and trade to support economic recovery in the post-pandemic era.

They also expressed their willingness to exchange and explore new paths of judicial cooperation and new modes of legal services to provide convenient and highly-efficient judicial services for rapid regional economic and social development.

Also attending the opening ceremony via video link were judges from various regions in China and ASEAN countries, as well as diplomatic envoys from some ASEAN countries to China.