The BRICS Justices Forum was held online and offline on Sept 21, with onsite venues in Beijing and Haikou of South China's Hainan province. Zhou Qiang, president of the Supreme People's Court (SPC) of China, and Shen Xiaoming, secretary of the Communist Party of China (CPC) Hainan Provincial Committee, attended and addressed the opening ceremony.

Heads of BRICS delegations pose for a group photo online for the BRICS Justices Forum held on Sept 21, 2022. [Photo/court.gov.cn] 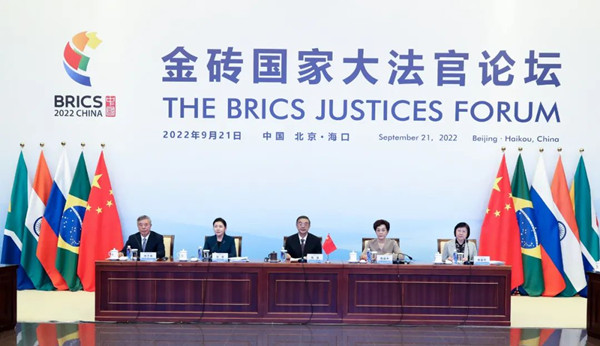 The Beijing venue of the BRICS Justices Forum which was held on Sept 21, 2022. [Photo/court.gov.cn]

Zhou, also China's chief justice, called for closer and higher-level cooperation among supreme courts in BRICS member states for a more comprehensive, pragmatic and inclusive partnership within the framework.

Zhou said 2022 was "China year" for BRICS, with China hosting the 14th BRICS Summit, which opened a new chapter of cooperation among BRICS members. As a key part of the cooperation framework, judicial exchanges have been carried out by SPCs in BRICS countries, offering strong judicial services and guarantees for socioeconomic development in those countries, he added.

Focusing on BRICS judicial cooperation in the new era, the forum is bound to promote a higher level of cooperation, Zhou said. He proposed to adhere to an open and cooperative spirit and the principles of extensive consultation, joint contribution and shared benefits, as well as to synergize legal systems and judicial policies for common prosperity. He called for improving cooperation mechanisms to enforce the role of the law and judiciary in global governance, enhancing cooperation levels and promoting the application of modern science and technology in judicial areas. Pragmatic cooperation in the digital economy needs to be deepened and the crackdown on data-related crime intensified, in order to foster a law-based environment for the sound development of the digital economy, he added.

Shen extended a warm welcome to attending parties on behalf of the Hainan provincial government. He said that Hainan had striven to deepen reform and opening-up in all aspects. In the construction of the Hainan Free Trade Port, key and core policies were made permanent and efforts were made to foster a world-class business environment that is law-based, international and convenient by setting up an intellectual property court and improving the concentrated trial mechanism for arbitration, mediation and dispute resolution in international commercials cases, according to Shen.

He welcomed cooperation with BRICS countries in areas such as IPR protection, mutual recognition and the enforcement of adjudication and arbitration, establishment of cross-regional resolution platforms for commercial disputes using big data, and legal talent cultivation.

Rosa Weber, chief justice and president of the Federal Supreme Court of Brazil, Vyacheslav Lebedev, chief justice and president of the Supreme Court of Russia, Uday Umesh Lalit, chief justice of India, and Boissie Mbha, justice of the Constitutional Court of South Africa, attended the opening ceremony online and delivered speeches. They all recognized cooperation among BRICS members in securing international stability and promoting sustainable development, ecological well-being and the rule of law. They also noted that judicial cooperation within the framework is becoming increasingly important. They lauded the tradition of holding justices forums, which they described as conducive in enhancing mutual trust and friendship among judicial organs within the framework.