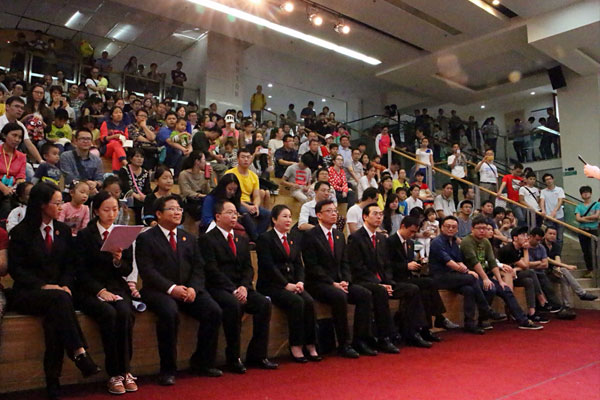 The Supreme People's Court holds a press conference on the case registration and filing system reform progress in Shenzhen, Guangdong province on Nov 15.

Sun Jungong, spokesman for the Supreme People’s Court, reported on the progress of China’s new system on case filing since its implementation at a press conference in Shenzhen, Guangdong province on Nov 15.

The Fourth Plenary Session of the 18th CPC Central Committee put forward a reform on acceptance of cases using the case registration and filing system as a replacement for the existing case review and filing system; it also urged that all cases should be accepted and all litigation should be processed to guarantee the rights of litigants to appeal.

According to a resolution made at the 11th meeting of the central leading group for deepening overall reform on April 1, 2015, the new case-filing system was to take effect on May 1, 2015.

On its implementation on May 1, the channels for case registration were opened to the public and the new system has operated well in courts across China. As of Sept 30, more than 6.2 million cases of first instance have been registered, up 31.9 percent from a year earlier.

Jiangsu, Zhejiang, Shandong, and Guangdong are the provinces with the most registered cases in China, including 608,000 cases in Jiangsu and 558,000 cases in Guangdong.

A key reason for the sharp rise of registered cases in courts at all levels is the implementation of the system. This result shows that the reform on case-filing has won popular support and accords with people’s will, and that the courts have fulfilled their commitments of “all cases should be accepted and all litigation should be handled”. It also indicates that courts have completely solved the difficulty in case-filing, so that people feel more satisfied with the judicial reform, resulting in high praise from people of all walks of life. A lawyer from a court in Shenyang’s Huanggu district said the case registration and filing system is the most thorough and effective reform in the history of the people’s court.

The register system has the following aspects:

a. The rights of litigants to appeal are fully guaranteed. Courts at all levels should carry out the principle of “all cases should be accepted and all litigation should be handled”. Now that the cases can be registered and filed at people’s courts, the plaintiffs in disputes concerning real estate, credit cards, rights and interests of members in villagers’ self-governing organizations, house demolition and relocation, and information disclosure were most often helped to solve the problems through reconciliation and other means, and most of the disputes did not require trial procedures.

b. The case-filing is more-normalized. The SPC released Opinions on Promoting the Reform of Case Registration and Filing System of People’s Courts and the Regulations on Some Issues Concerning Case Registration and Filing System of People’s Courts, which set out clear requirements regarding acceptance of petitions, on-spot case-filing, notification and supplementation, and legal costs, to standardize case-filing procedures, improve efficiency and protect the rights of litigants to appeal. Courts across China have organized professional training programs, regulated guidance in litigation, detailed the procedures for registering case filing, carried out one-off notification, and helped the plaintiffs to finish all the procedures easily and conveniently.

c. Litigation services have been improved. Courts across the country have taken advantage of the case registration and filing system reform to build their own litigation service centers, launch digital courts, and promote online case filing. By Oct 28, a total of 29.8 percent of civil cases in Jilin province were filed online. Meanwhile, they maintain close communication with deputies to the People’s Congress, CPPCC members, experts and lawyers, news media and the broad masses of the people, and invite representatives from all walks of life to supervise case filing and ensure transparency in the work.