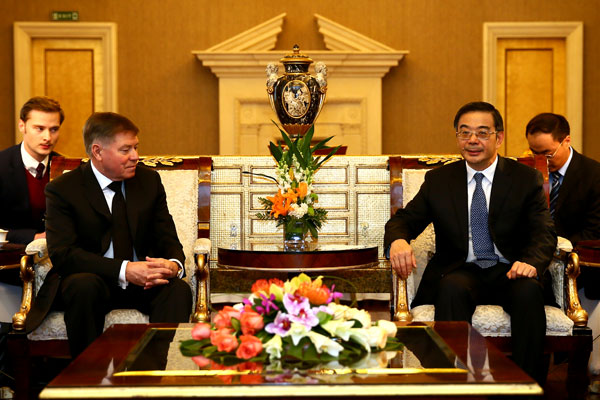 Zhou welcomed Lebedev and briefed him on China’s rule of law and the work of courts. He said the just-concluded fifth plenary session of the 18th Communist Party of China was an important conference in building an all-round well-off society, and was of great significance both today and historically for China’s development of socialism with Chinese characteristics. It brought closer the realization of the two centenary goals and the Chinese dream of the great rejuvenation of the Chinese nation. Chinese courts will take the implementation of the spirit of the conference as their top political task so that it guides their work, as well as give full play to the functions of the people's courts and provide powerful judicial service and guarantees for China’s 13th Five-Year Plan (2016-2020).

Zhou said “As economic globalization and informatization advance, courts in both China and Russia face common challenges. Keeping close and friendly contact in the judicial field between the two countries will further promote the rule of law and deepen the comprehensive strategic partnership for both sides. In recent years, the supreme courts of China and Russia have developed effective cooperation under the multilateral frameworks of the Shanghai Cooperation Organization and BRICS countries. Many cooperation projects are carried out actively and in an orderly way. Exchanges of courts and personnel are increasing, which improves mutual understanding and relationship.”

He also called for more exchange and communication in judicial reform, with training for judges to further push forward the two countries’ cooperation.

Vyacheslav Lebedev held that judicial organs in all the countries are confronting common issues, and Russia’s Supreme Court attaches great importance to and is willing to further strengthen communication with its Chinese counterpart, promote mutual understanding and trust, deepen cooperation, and advance continuous development of friendly relations between China and Russia.