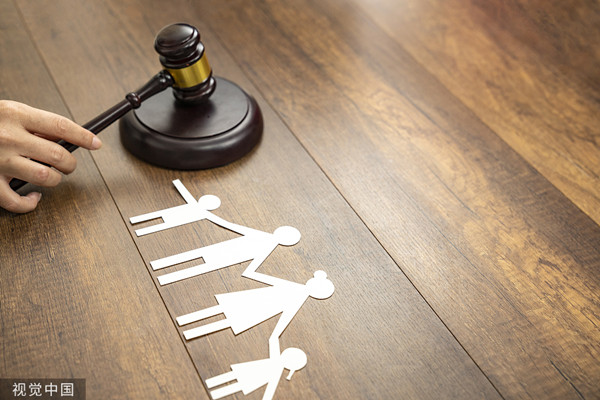 The new guideline, which is released by the Supreme People's Court has lowered the threshold of proof collection and listed 10 types of behavior that can be identified as evidence of domestic violence. [Photo/VCG]

Victims encouraged to collect digital evidence to better protect themselves

Victims of domestic violence will soon have easier access to personal protection orders, thanks to a new guideline issued by China's top court.

Given that some victims complained that it's a challenge to obtain the orders due to their inability to obtain sufficient evidence, the new guideline, which was released by the Supreme People's Court on Friday, has lowered the threshold of proof collection and listed 10 types of behavior that can be identified as evidence of domestic violence.

For example, phone recordings or text messages between victims and alleged perpetrators, records of victims' medical treatment or proof of them seeking guidance of protection from women's federations are also included on the evidence list, according to the guideline, which will take effect on Aug 1.

It also states that if the evidence is sufficient to indicate a high probability of domestic violence, courts should issue personal protection orders to victims as soon as possible.

"These provisions will further ease the collection of evidence for those suffering from domestic violence, providing them with stronger legal support as well as safer and more dignified lives," said Wang Dan, a judge from the top court's No 1 Civil Division.

Wang suggested victims take the initiative and collect evidence while being harmed or mistreated by family members and submit this to courts when applying for personal protection orders.

To ensure that the orders, which are similar to restraining orders issued in the West, arrive in time to prevent incidences of domestic violence, the guideline also clarifies that the orders can be applied for, reviewed and issued independently.

"Understandably, people will not need to initiate a divorce lawsuit or other civil litigation if they want to apply for the orders," said Zheng Xuelin, chief judge of the division, adding that quicker issuances mean more efficient protection for victims.

In addition, the guideline has beefed up courts' ability to issue protective orders by listing more situations that can be deemed as domestic violence, such as harming family members by denying food, incessant insults, slander, threats and other forms of verbal abuse, as well as stalking or harassment.

It also encourages other nonjudicial efforts, including by civil affairs departments, disabled persons' federations and organizations for the elderly, to help victims apply for orders.

Until now, China's Anti-Domestic Violence Law has defined domestic violence as physical, mental or other harm from partners or family members through physical abuse, restriction of personal freedom, or frequent verbal abuse and intimidation.

The law has also allowed close relatives, public security authorities, women's federations, community committees, village committees and battered women's shelters to help apply for personal protection orders on behalf of those who are unable to do so themselves.

Regarding the guideline as a specific supplement to the law, Zheng said the new document will help courts issue orders more efficiently so as to ensure victims of domestic violence can be protected in a timely fashion.

Statistics provided by the top court showed that a total of 10,917 orders had been issued by the end of last year, offering protection of dignity and health for those suffering from potential and real harm from family members or partners.